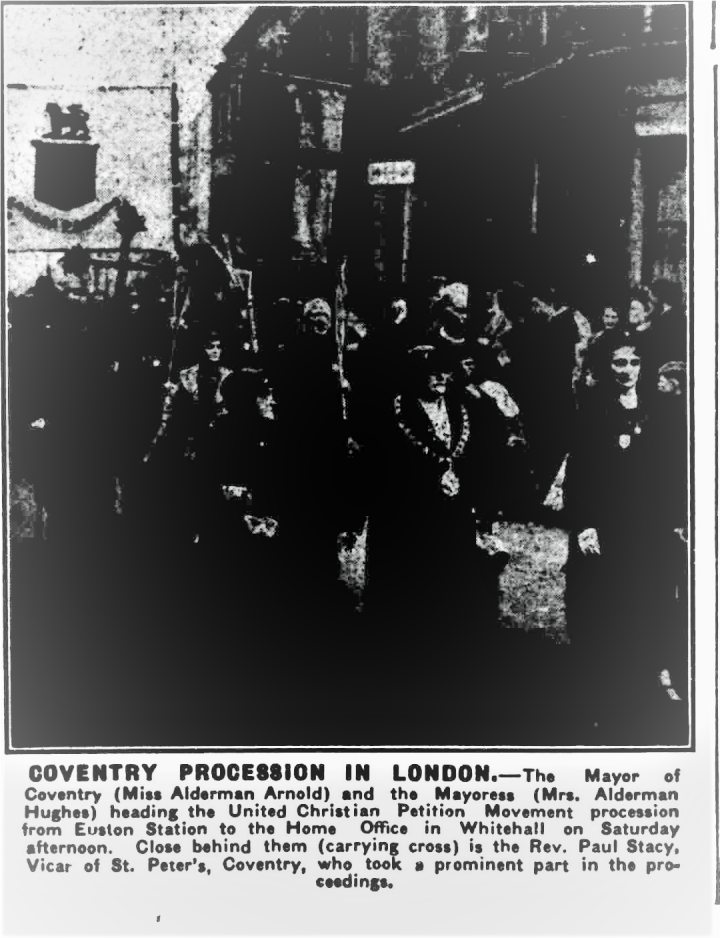 Coventry’s reputation as a city of peace and reconciliation, led by the international work of its Cathedral, is known throughout the world. The powerful images of the charred roof beams fallen in the sign of the cross and of the cross of nails created from the debris of the devastated Cathedral in 1940 have come to symbolise hope and international friendship. In the 1940 Christmas Day service, broadcast from the Cathedral ruins, Provost Howard looked towards a future in which the Cathedral would work with all people ‘to build a kinder, more Christ-like world’.

What is less well known is that Coventry was making its mark as a city promoting peace and equality before the Second World War began. In 1938 the city’s first woman mayor, Alderman Alice Arnold, led a deputation of Coventry citizens to London to present the so-called ‘Peace and Plenty’ petition at the Home Office, addressed to the King, asking for a judicial commission to investigate ways to avoid war and to ensure peace and lasting prosperity for all. The story behind this petition – signed by 60,000 Coventry citizens  – as well as the lead that Coventry provided for other cities, just weeks after Chamberlain’s return from Munich, with his message for ‘peace in our time’, are extraordinary and deserve to be remembered, 80 years on.

The twin anxieties of economic depression and the gathering war clouds were uppermost in the minds of millions of people during the 1930s. Coventry’s ‘new’ engineering industries may have ensured that the very worst of the world economic crisis was avoided in the city but unemployment and short time working had nevertheless left deep marks since the 1920s. In addition, from the late 1930s, there was no escaping the fact that the city was at the forefront of Britain’s rearmament production and that its economic prosperity was bound up with preparations for war.

The organisation behind the petition that Alice Arnold took to London was founded by Mr Robert Scrutton, when he was staying with the popular and socially aware vicar of St Peter’s Church in Hillfields, the Reverend Paul Stacy. Started as an avowedly non-party political movement, it instead declared itself to be a united Christian attempt to seek broad agreement on principles which would end poverty, remove the economic causes of war and in so doing, seek social well-being and security for all people. Named the United Christian Petition Movement (UCPM) it had six broad principles:

Through public meetings and an ambitious programme of door knocking, it was claimed that signatures were being collected at the rate of 2000 a week, with 51,000 by the summer of 1938. By the time Alice Arnold handed the petition to the Home Office on 29 October, the 60,000 names gathered amounted to nearly a third of the city’s population (the equivalent of over two thirds of its electorate).  There were meetings in other British towns and cities but it was decided that Coventry should lead the way in recognition of the fact that the movement had its origins there. Extra poignancy was attached after Neville Chamberlain returned from Munich in late September 1938, waving the piece of paper with which he hoped that war in Europe might be averted. In a letter from Mayor Arnold appealing to Coventry employers to give their workforces time off from work (on a Saturday, which was often a half day in industry) to accompany the petition to London, she wrote that it was felt that ‘the most practical offering of thanksgiving for the untiring efforts of the Prime Minister’, was for Coventry to set an example to encourage other cities to ‘work to obtain the settlement of all national and international disputes by similar peaceful negotiations, based upon justice and humanity’. Alice Arnold did not ignore the fact that this peace had only been secured due to the ‘the great sacrifice’ made by one nation – the agreement allowed Hitler to annex the Sudetenland – and the UCPM noted that the gratitude of thousands and thousands went out to the people of Czechoslovakia.

Support for the Petition was not, however, found in all quarters. An editorial in the Midland Daily Telegraph stated that ‘if every political organisation sought to further its cause by arranging monster petitions to His Majesty the King instead of pursuing the normal channels so deeply ploughed into the fabric of every democratic State’, political structures would need to be redrawn. Despite not wishing to hinder any political movement seeking remedies to major social problems – in this case mass unemployment – the conservative view put forward was that this was a matter for Parliament and for legislation. Arguably, the numbers of signatures on the Coventry petition tell a different story.

A special train was chartered to take the Coventry deputation which had the support of the city’s churches, trade unions, some members of the City Council, the manager of the city’s Labour Exchange and, it was claimed, of some leading members of local industries. At Euston, Coventry folk were joined by over a hundred clergy as well as by members of the Social Credit Movement, together forming a procession that was around a quarter of a mile long, complete with band. Crowds cheered it on its way to Whitehall and the press reported that in Gower Street, Indian students (where the YMCA Indian Student Hostel was located) came out onto the street to show their support.

The leaders of the procession, Mayor Arnold and her Mayoress, Councillor Ellen Hughes, were the first two women to be elected as councillors in Coventry and their prominence on this day in 1938 ought, I think, to be remembered as a landmark feminist event in the city’s history. Together they laid a wreath at the Cenotaph before handing in six bundles of signatures at the Home Office. The Mayor received a bouquet of flowers from two prominent women supporters of the UCPM, Lady Claire Annesley and Baroness Heyking. At a meeting in Horse Guards’ Parade, Alice Arnold expressed her pleasure in supporting the petition and said that ‘we feel that if Christianity existed in its truest sense we should not be in the position we are today’. Despite the fact that wealth could so easily be produced, there were hundreds of thousands of people living in poverty because of the present economic system. This was a subject dear to the Mayor’s heart who herself was born into poverty in Coventry. She began work at the age of 11 and by the First World War, was an organiser for the Workers’ Union, speaking up for the rights of women workers. When she and Ellen Hughes became city councillors in 1919, both campaigned vociferously for better living standards for Coventry citizens, drawing attention to the dire consequences of poverty in their city.  Alice Arnold’s own health was poor and the day in London must have taxed her strength, for it came only a few weeks after a lengthy spell in the city’s municipal hospital for complete rest, whilst her secretary brought in official papers for her to sign, so determined was she to serve her city.

On her return to Coventry after the deputation, Alice Arnold, her mayoral year now drawing to a close, appealed to Lord Mayors and Mayors in Britain to work with the clergy in launching UCPM campaigns in their own cities. Places that agreed co-operation included Birmingham, Newcastle, Sunderland, Oxford, Barnsley, Harrogate, Liverpool, Bexhill, Nelson, St Ives, Tottenham and six other London boroughs. Preparations were made to follow Coventry’s example and in February 1939 it was hoped that the people of Sunderland would soon be able to add their names to the two million nationwide it was claimed had now signed the petition. In April a public meeting in Liverpool appealed for people to attend a public meeting to discuss ‘Peace and the Abolition of Poverty Everywhere’. In the summer it was reported that over 89 British towns and cities and 23 countries, including Switzerland and France were launching similar campaigns.

The Movement was short lived, overtaken by the realisation that there would be no ‘peace in our time’ and the final descent into the Second World War began, just 20 years after the end of the War to end all wars. Yet the support shown for the Coventry petition in 1938, at a time when rearmament was gathering pace and civil defence measures were very public reminders of the fragility of ‘peace’, demonstrates the willingness of a city to work towards a world in which insecurity and poverty could be eradicated and there would be no more war. It was, however, by now evident that Fascism must be militarily defeated before there could be any more talk of a new world based on social principles that would ensure security, liberty and opportunity for all.

It cannot have been predicted that just over a year into that war on Fascism, Coventry would again lead the way with messages of hope, kindness and, in the wake of the devastation of the city, of forgiveness too.

The majority of material used here is from Coventry’s and other local newspapers. With thanks to Coventry History Centre and the British Newspaper Archive www.britishnewspaperarchive.co.uk