I have been feeling sorry for myself this week. Flu is a miserable state of affairs and now, although out of bed, I am left with little energy or inclination to do anything. On International Women’s Day I am thinking, however, about the quiet, steely determination displayed by so many women to get on with the task in hand – and to make a lasting difference to other women’s lives. Sometimes the smallest acts are the most effective and so, in the absence of any great statements (too tired!), I just want to say thank you to those women who found their cause, who kept going and who, in the most practical and sensible of ways, set out to put things right in their communities.

Two such women were Coventry’s first women councillors. Alice Arnold and Ellen Hughes were elected for Labour in 1919, in the first municipal elections after the First World War. In a city suffering in the 1920s from high unemployment and inadequate housing, these two pioneers placed the relief of poverty at the heart of their work, often paying close attention to details overlooked by those who saw policy where they saw people. They sought the construction of Council housing that was not just adequate but well designed for families. All houses, insisted Councillor Hughes, should have baths and hot water heating to tackle ‘the incessant chasing away of dirt’. Kitchens needed dressers and built in cupboards, despite the fact that many male councillors thought that they were an unnecessary expense. There must be space for children to play safely, away from the roads and estates should be provided with centres where children over the age of two could play, looked after by trained nurses.

Sporting facilities, said Councillor Arnold, should be available for all, not just the wealthy and in an election speech in 1919, she employed her characteristically direct manner to state that,

if we cannot get land at a reasonable price I am prepared to confiscate it, and return it to the right owners, the common people. We cannot have an A1 nation when the good things of this world are kept from the mass of the people.

John Yates, a contemporary of Alice Arnold’s recalled that,

There were two points she always used to make in her speeches in those days, especially if she could get an afternoon audience with a few fur coats in it. One was the instruction sent out to Local Authorities when Mr Chamberlain was Minister of Health, that baby food could no longer be given away at clinics, however poor the mother, but must be paid for at threepence a packet. The other was the row then going on between the Medical Officers for Heath and the Ministry over starving schoolchildren. The MOHs said that they ought to have power to order free meals before a poor child showed the actual symptoms of malnutrition, the Ministry said, No! You shall only feed the child actually suffering from malnutrition – that is the law.

By 1939 eleven women had served as Labour councillors in Coventry, many drawing on their prior experiences as Poor Law Guardians, trade union organisers and magistrates.  As we approach the centenary of the election of Councillors Arnold and Hughes, I will be writing much more about these remarkable pioneers and the women who joined them on Coventry City Council, but I want to conclude with a tribute to another Labour woman councillor, this time serving in Manchester from 1924. This story from Hannah Mitchell inspires me because here is a woman who gets it completely. No need for fanfares, for statues or public acknowledgments. She identified a piece of land in her ward and persuaded the Baths Committee to build a small wash-house where women could hire ‘stalls’ to do their household washing, making use of hot water, extractors, hot air driers and ironing tables. These buildings, so important all over the country to housewives, meant that the home could be kept free of the damp caused by dripping washing and steam, that less fuel was required and that the exhaustion of wash day could be kept to a minimum.

Councillor Mitchell was not granted the honour of overseeing the formal opening of the wash-house and it was instead opened by a representative from another ward. A little piqued at this (because ‘the males who were before me on the rota refused to give way’ and allow her the privilege out of turn), she wrote,

Perhaps there was a spice of malice in my speech when moving the vote of thanks, but I think my neighbours understood, and applauded very generously. It isn’t a very romantic memorial, but every time I pass the little building, I feel that the women who helped to send me to the Council have something tangible to remember me by.

So, here’s to the women who have worked to provide the services that have not been heralded with grand memorials but which have made such a difference. Their work goes on and I wish them all a very happy international women’s day and my eternal thanks. 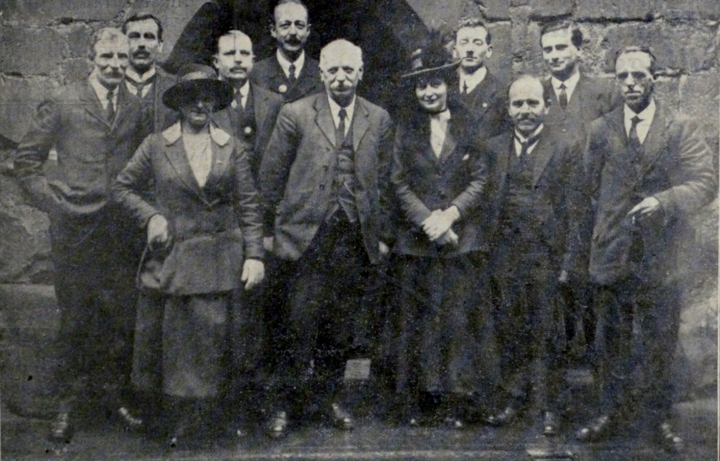 The Labour Group on Coventry City Council, 1919. Miss Alice Arnold is on the left and Mrs Ellen Hughes on the right. 14 November 1919, Coventry Graphic. The photograph is taken from my forthcoming book, A History of Women’s Lives in Coventry (Pen and Sword) and is reproduced with kind permission of Coventry History Centre. Not for copying anywhere else.

The Hard Way Up: the Autobiography of Hannah Mitchell, Suffragette and Rebel, edited by G. Mitchell, Faber & Faber 1968